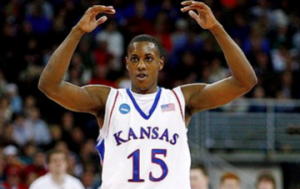 d Mario Chalmers came back to Lawrence in the end of July despite his busy workout schedule getting ready for his next NBA season. As he has done for the past few years,  he made time to come by Crown Automotive to sign autographs for all of his fans here in Lawrence. Crown also co-sponsored his annual golf tournament. Due to the donation that Crown made to the Mario V. Chalmers foundation, we were able to enter three teams in the tournament. Miles Schnaer headed up the first team while one of our managers, Randy Habiger took the second spot. Miles donated the last team to the local first responders of Douglas County. Participants included Detective Jay Armbrister of the Douglas County Sheriff’s Office, Captain Steve Weaver from Lawrence Douglas County Fire-Medical, Sergeant Gregg Schiffelbein of the Baldwin City Police Department, and Firefighter/EMT Dusty Kilgore of the Eudora City Fire Department. For more information about Mario’s next visit/event visit http://www.mariovchalmersfoundation.org/.