Toyota is preparing to expand the Prius lineup with a mysterious new model. The car will be presented to the public in a little over a week during the New York Auto Show.

The Japanese car maker’s teaser image is accompanied by a brief blurb that explains that the car scheduled to debut in New York is “the next mechanical marvel in the Prius lineup.” That’s certainly not a lot to go on, but a closer look at the dark picture suggests we could be looking at the plug-in hybrid variant of the new, fourth-generation Prius. If that’s the case, it will stand out from the regular hybrid variant by wearing a specific design for the first time ever. 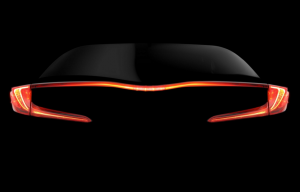 While the hybrid Prius boasts tail lamps that stretch well into the bumper, the plug-in hybrid model appears to get specific C-shaped lights connected by a light bar with an integrated third brake light. It’s not unreasonable to assume Toyota will give the plug-in model a new front end to further set it apart from its hybrid sibling. However, the two models will share more than a passing resemblance when viewed from the side.

Toyota is keeping tight-lipped about what’s under the Prius’ sheet metal. AutoGuide speculates the plug-in drivetrain will be built around a much bigger battery pack that will allow the Prius to drive on electricity alone for anywhere between 30 and 35 miles. That’s better than the last-gen model, which only managed 15 miles of all-electric driving, but it still falls short of the Chevrolet Volt‘s roughly 50-mile range. Of course, we’ll reserve our judgment until final specifications are announced.

Related: Toyota wants your family to keep the wood-bodied Setsuna for a century

Stay tuned, Toyota will publish more details about whatever it’s planning on showing in the Big Apple in the coming days, and the car will be introduced online shortly before the New York show opens its doors to the press. If we’re indeed looking at the plug-in Prius, it will go on sale this summer as a 2017 model.