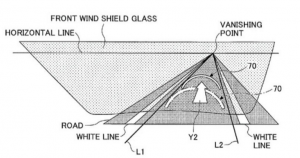 Automotive head-up displays already offer a modicum of augmented reality by showing info like speed and navigation directions on the windshield, but Toyota now has a patent that could make the tech even more useful. The Japanese automaker has a way to move the image dynamically to keep drivers better informed about the road ahead.

Toyota’s patent works like a conventional HUD to display vehicle instruments on the windshield. Where this solution differs is that an ECU analyzes the steering angle and speed; a front-mounted camera identifies the lane markings, and an interior camera finds the driver’s viewpoint. By combining this data, the system moves the information around the windshield to be in the best location. For added safety, the image’s size corresponds to the vehicle’s width, so drivers also know their position in a lane. As speeds increase, the display moves up the screen and gets smaller because a person is looking further into the distance.

Toyota’s patent seems both incredibly useful and quite realistic. The individual components for this tech already exist, but the Japanese automaker’s idea employs them in new ways. We hope the company licenses the idea out for other HUDs because the applications could be a lot of fun. Imagine riding with a performance-tuned version in the augmented reality motorcycle helmets from Reevu and BMW. It could entirely remove the need to look down from Samsung’s Smart Windshield, too. We can even imagine this being helpful when crawling off-road with Land Rover’s Transparent Bonnet, which lets you see through the hood.