Toyota had one main goal in mind when it engineered the Prius Prime, the upcoming second-generation Prius Plug-In. The new car had to be more electric. Compared to the first plug-in Prius, this wasn’t exactly a difficult task, since that one could go just 11 miles on its piddly battery.

Toyota heard all your complaints.

Toyota made its e-mission clear right from the get-go. We learned at the Prime’s unveiling at the New York Auto Show in April that the new model would get 22 miles of all-electric range. That’s also when we learned just how much Toyota heard all your complaints. Whether in online forums, at focus groups, or through customer research, Toyota got the message that what people want from a “green” car in 2016 is electric miles. And an “electric” Prius that could only go 62 miles per hour – like the first-gen did – before the gas engine was forced to turn on just wouldn’t cut it. Good news, everyone. The Prime can reach 84 mph without any assist from the on-board fossil fuels. You might not always want the car to run up to that speed using nothing but battery power, but more on that in a bit.

Customers also told Toyota that they liked the incredible gas-powered efficiency that the Prius offers. For many car buyers, miles per gallon remains the one and only way to define a car’s green cred. The Prime is expected to get the same fuel economy as the fourth-gen Prius Liftback, which means 52 combined mpg. Official numbers will be out later this year, but 52 is a lot higher than, say, the second-gen Chevy Volt, which gets 42 mpg (along with, of course, a whopping 53 miles of all-electric range).

Numbers on paper, though, only tell you a little bit of the story. Thankfully, we recently got to try out a pre-production Prime on a test track in Japan. It was a long way to go for a short drive (just three laps of a three-mile loop), but if you pay attention, you can learn a lot from a little. 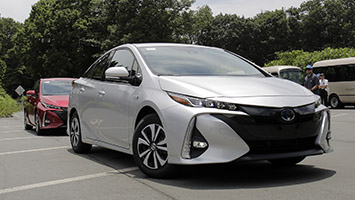 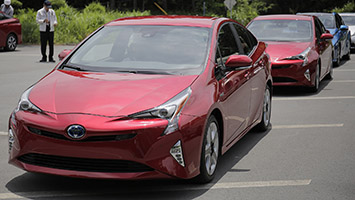 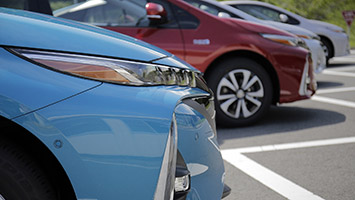 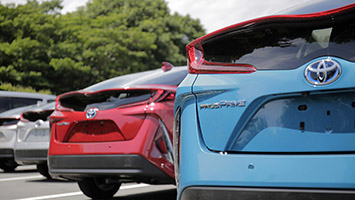 Heck, you can learn a lot even just from the look of the Prime. While it shares much under the metal with the fourth-gen Prius, it’s impossible to mistake the two. The front end has been given the treatment it deserves, and the character-laden rear end, with its elegant strip of red LEDs, sets it apart from the controversial fourth-gen Prius update. More than once during our time on the track we heard that the Prime is what the fourth-gen Prius should have been, and we agree. Also, the Prime has an amazing rear window with an attractive central dip that cannot have been cheap to include in the final design, but it’s completely worth it. When you open up the rear hatch, you’ll be able to see one of the ways Toyota cut some of the weight from the Prime thanks to exposed carbon fiber near the seal. All the carbon fiber used in the Prime is made by Toyota, which signals that we can expect a lot more of this sort of lightweighting from the company in the coming years.

Make no mistake, this is undoubtedly a Prius.

You can even learn a lot from the name. It’s not subtle, but the Prime designation makes it clear that Toyota thinks this is the absolute best model in its popular hybrid lineup. And make no mistake, this is undoubtedly a Prius. There’s the traditional push-button starter and, just like all the other Priuses, the Prime proudly carries on the tradition of offering up plenty of pointless beeps and buzzes. You can’t miss the cutesy little melodies that play when the car is turned on or off. But this time the sci-fi sounds are at least in good company with an 11.6-inch, full-color touchscreen that dominates the center stack and responds to some swipe commands, just like your phone. Navigation comes standard and there’s an available color head-up display to make the Prime feel suitably tech-y. For the few minutes I was able to try it out, the interface felt intuitive and easy to use, and even a bit futuristic. In fact, when you drive the Prime after getting out of a first-gen Prius Plug-In (itself based on a standard third-gen Prius), the differences are so stark you might think a few decades had passed between the two, not just five years.

Where you learn the most, obviously, is behind the wheel. And this is where the Prime shows its full promise. Just like the new Prius Liftback, the Prime does not drive like a Prius of old. Thanks in part to a new double-wishbone independent rear suspension and the new TNGA platform, the Prime is more spritely than all earlier Priuses. The car is more connected to the road, and anyone who has been interested in the incredible fuel efficiency of the Prius but wanted something more engaging should most certainly get themselves some seat time. Compared to its plug-in predecessor, the Prime offers way more quiet, more oomph, and – yes – more electric power. In short, drivers will have far less to complain about. 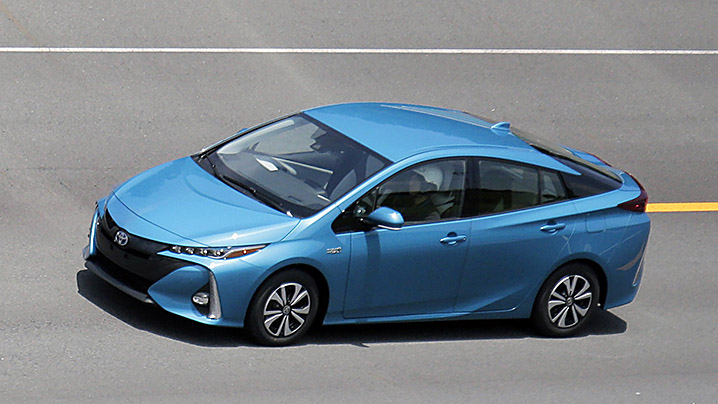 The improved driving style is also helped by how Toyota changed the way the two electric motors work in the new plug-in powertrain. In the previous Prius Plug-In, there were also two motors, but one was used to move the car and the other was used as a generator. Now, thanks to a new one-way clutch, both motors can propel the Prime while the engine locks up. Overall output from the motors has grown from 37 kW to 68. That’s part of the reason for the higher top electric speed, but it also means that the Prime operates more like an EV more of the time.

For anyone familiar with the first-gen Prius Plug-In, this is a whole new universe of electric possibility.

There are numerous (and slightly confusing) drive modes, but the default is EV Mode. If you’ve got enough energy in the pack (and exactly where this threshold lies remains a bit of a closely held secret, since Toyota isn’t willing to say how much of the 8.8-kWh pack is being used), then the Prime is, effectively, a pure EV. As long as the display shows at least one electric mile remaining, you’re going under 84 mph, and you’re in EV mode, the engine will not turn on. For anyone familiar with the first-gen Prius Plug-In, this is a whole new universe of electric possibility. You could hear that car’s engine whine almost constantly due to the lower top electric speed and the small battery size. No wonder people complained.

But here’s where we get back to the fact that you might not always want pure EV operation, despite the coolness of passing someone on the highway without any tailpipe emissions. When the Prime is in EV Auto mode, it emphasizes electric-only operation, but there are times when the system will fire up the gas engine even if there’s some charge left in the pack. That’s because the ECU calculates the absolute most efficient power source – gas or electric – to move the Prime. Sometimes it’s just better, apparently, to burn a bit of gas than use battery power. Thanks to selectable modes, EV lovers can state their preference for electric drive, having their cake and eating it, too. Up to 22 miles per charge. Of course, practiced hypermilers might be able to squeeze a few more electric miles out of the car, especially if they follow the eco score on the dash that constantly updates to tell you how you’re driving. A two-color battery display shows green for the power needed for EV mode and blue for standard hybrid operation. We suspect someone with a real light foot will be able to get close to 30 miles of EV action. Whether or not this is possible is something we’ll have to wait for a real road test to determine. 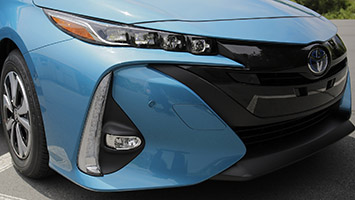 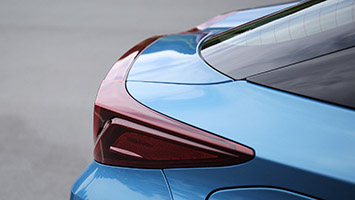 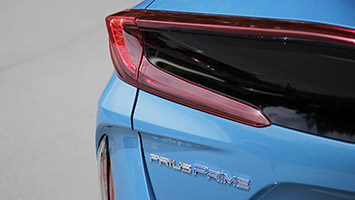 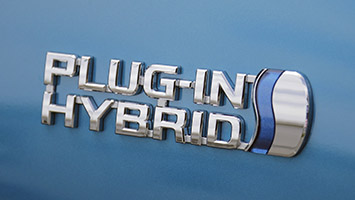 When your electric joy ride is over and the pack’s charge is depleted, the Prime shifts into Hybrid Mode. Here’s where it reveals its most amazing feat. There’s simply no other car that has a 22-mile electric range and can also get over 50 mpg. Of course, in Hybrid Mode you’ll hear the familiar engine noise from the same 1.8-liter Atkinson-cycle, four-cylinder engine that can be found in the standard fourth-gen Prius. As we said, once the battery’s run low, you’re pretty much driving a better-looking 2017 Prius, just with space for one fewer passenger. There was plenty of leg and head room for my 5-foot-9-inch frame in a rear seat, but, well, there are only two of them.

I did have some minor quibbles with the Prime. The touchscreen, while pretty, has some glare, more than in what I would consider the class-leader in this category, the screen in the Tesla Model S and X. Not a deal-breaker, but something to note. The designers also decided to throw in one of the worst ideas to hit the industry in years: touch-sensitive buttons. There are only a few of them, controlling some HVAC, volume, and other options on the left and right of the touchscreen, but they’re just not as good as physical buttons. Also, while the JBL speakers sounded fine, there’s no reason for the bright orange JBL logos on the front corner speakers that are nestled up near where the windshield meets the hood. They serve no purpose other than to create a bright orange reflection on the windshield, a totally unnecessary distraction. Let’s hope Toyota opts for a darker logo color in the production version of the Prime. 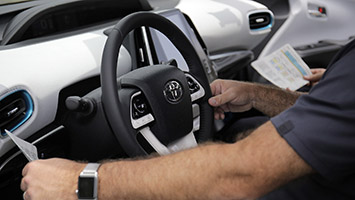 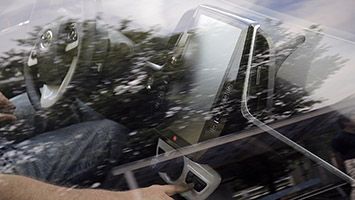 The latest plug-in Prius will be available this fall in all 50 states, and we expect to learn about pricing and things like a 0–60 time when we get to spend more time with the car in September. However it’s priced, the Primeshould qualify for federal tax credits worth $4,168. As in every other comparison we can think of with the earlier plug-in Prius, the Prime is better than what came before. The first-gen only got a $2,500 credit thanks to its smaller battery pack.

Without question, the Prime’s MSRP is going to determine if it will be a hit.

Without question, the Prime’s MSRP is going to determine if it will be a hit. It certainly could be. If Toyota prices this thing correctly (i.e., at most, around $4,000 more than the standard Prius), there’s absolutely no reason why anyone should buy the Liftback instead, unless they really, really need that fifth seat. That said, anyone looking to buy a new green car in late 2016 or early 2017 will be comparing the Prime with more than just the standard Prius. In a world where the green-car halo has effectively been stolen by Tesla, Toyota needs to do a lot to reclaim its long-standing position in customer minds as the environmental car company. And let’s not forget that cheaper electric vehicles with ranges of over 200 miles – see the Chevy Bolt and the Tesla Model 3 – are coming soon. In this new reality, a Prius – even a great one like the Prime – with just 22 electric miles might not have the reach it needs.