Busch and Crampton Win Big in NASCAR and NHRA

“To get 200 (wins) here today at Auto Club Speedway is pretty cool,” Busch said. “I mean, to bookend number one and 200 here at the same place, it’s pretty crazy. Just being able to win, it’s what it’s about.”

Busch swept both stages of the race before a pit road speeding penalty during the Stage 2 break sent him to the back of the field on the restart. The Camry driver rallied to the front, however, leading a combined 134 laps (of 200) to capture his second MENCS win of 2019. He remains the only driver to finish in the top 10 in all five MENCS events this season.

A day earlier, Busch fell just short of the 200 wins mark, finishing runner-up in the NXS race at the two-mile California track.

Busch led 98 laps (of 150) before an uncontrolled tire on pit road sent him to the tail end of the field. With 32 laps remaining in the event, Busch attempted to race back to the front and ultimately finished in the second position.

“Obviously we were able to rebound, but when you have a fast guy out front and a fast guy in second, they run the same times and they stay the same distance apart,” Busch said. “We just weren’t quick enough there at the end to chase them down.”

NHRA
In Gainesville, Florida, Crampton won his second-straight Gatornationals on Sunday with a holeshot effort in Top Fuel. It was his ninth career-series win in 11 final round appearances as Toyota drivers have now won five of the last nine Gatornationals.

Crampton had a 0.016 advantage on the tree and was able to hold on for the win with a margin of victory of just 0.0032 seconds or approximately 18 inches.

“We live and die on our reaction times,” Crampton said. “Coming into the race today, I knew I needed to be on it. The field we have in Top Fuel now is the cream of the crop. You’re winning and losing everything on the starting line and I’m focusing on that. I’m pretty proud of what we accomplished today.”

While Crampton was victorious, it was his Toyota teammate, Doug Kalitta, who retook the series points lead after advancing to the Top Fuel semifinals. He now holds a 42-point advantage over second. 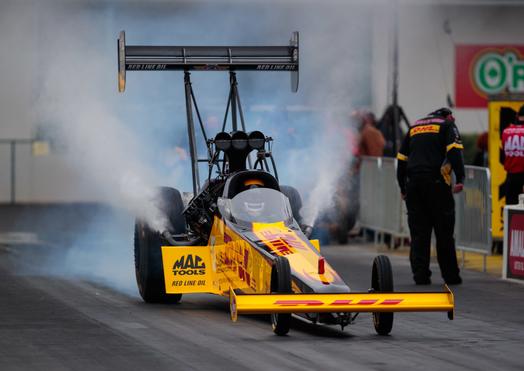