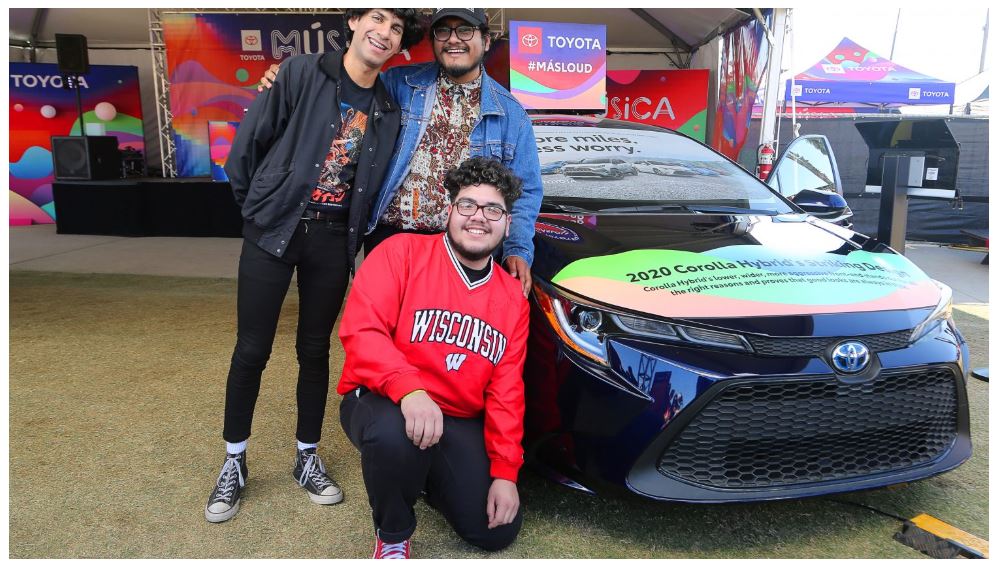 PLANO, Texas (November 14, 2019) – Toyota drove culture forward throughout 2019 for thousands of passionate guests during some of the year’s hottest music festivals. Partnering with the freshest talent in the Latin music scene, Toyota’s Music Den and overall Música experience brought music and art together in a space where music aficionados across the country celebrated culture. Through the hashtag #MásLoud, festivalgoers shared how they stand out and express pride in their heritage.

“Music permeates our lives daily – in the car, hanging with friends or celebrating with family,” said Matt Ozawa, engagement marketing manager, Toyota Motor North America. “Supporting talented, emerging Latino talent is fundamental to our belief in bringing our guests closer to their favorite artists in an atmosphere that further propels music and cultural connections.”

The music season kicked off with Toyota’s fourth year at Ruido Fest, an annual multi-day Latin American alternative music festival held in Chicago, Illinois. The ride continued to the epic Lollapalooza, highlighting some of the most anticipated artist performances in the U.S. and marking Toyota’s ninth year as the automotive sponsor of the festival. The Toyota Music Den kept the festivities going over Labor Day weekend at the third installment of Los Dells Festival, coined as the biggest Latin music festival in the Midwest.

Toyota capped its 2019 festival season as the official automotive sponsor of the third annual Tropicalia Festival, held November 9-10 in Pomona, California. Toyota’s branded stage featured an impressive lineup of artists throughout the weekend. In addition, indie/alternative band The Red Pears returned to the Toyota Música activation area for a special meet and greet with fans.

At each of the year’s festivals, the Toyota Música interactive area highlighted vehicle activations featuring the all-new 2020 Toyota Corolla sedan (at Tropicalia; 2019 model at other festivals) and the all-new 2019 Toyota RAV4. Socially-shareable activities and cool giveaways enhanced the fan experience, which emphasized the evolution of culture through music, art and self-expression.

Toyota’s Music Den within the Música footprint provided an intimate setting for an impressive lineup of emerging artists to perform and connect with fans, including: