WILLOWS, Calif. (December 10, 2019) – Engineers and technicians from Toyota’s Arizona Proving Grounds (TAPG) brought their Toyota 86 to Thunderhill Raceway Park in Willows, California for the second year in a row this past weekend. With heavy rains in the forecast, the team, including racing legend Randy Pobst, who was brought onboard for the event, set out to conquer the NASA 25 Hours of Thunder Hill endurance race. The team, which has been continuously improving since they were formed just a few years ago, has been championing NASA endurance races across the Western United States for the past two seasons.

While winning their class at Thunderhill was the ultimate goal, the experience and challenge of completing the grueling 25-hour endurance race was high on the minds of the engineers. A year ago, during their inaugural attempt at Thunderhill, illness and a catastrophic mechanical failure resulted in a DNF. It was something they didn’t intend to repeat.

“One of our goals when we originally put this team together was to eventually be competitive at Thunderhill,” said driver and team captain D.J. Quint, a senior performance development engineer at Toyota’s Arizona proving grounds. “We were ready last year, but things just didn’t go our way. We’ve gained a lot of experience and learned a lot of lessons since then, and we plan apply that to this year’s competition.”

Tackling the 25 hours of racing in rotating two– and three-hour stints, the Toyota team drivers overcame the heavy rains, mud, and mechanical challenges to lead much of the race. The timing and execution of routine pit stops for fuel, tires, and driver changes had been honed to a science by the group, who often would be leading by ten laps or more.

Frontend damage, and the ensuing repair time, set them back into a neck-and-neck race with their closest competition, with both teams trading the lead several times. Wheel damage late in the race brought the 86 back into the pits for repairs. While quick work by the crew had the car back on track for the final segment of the race, they ceded their first-place position. While disappointed to not place first, the team was more than happy with their strong showing and incredible teamwork.

Randy Stephens, group vice president for vehicle performance engineering joined the crew for the race saying, “the most impressive thing to me is the teamwork. Someone is always ready to step in and do their part to support the overall mission.”

Senior engineering manager and driver Mike Donick echoed Stephens’ sentiments. “The teamwork and the bond we build competing in these types of events, directly translates into the office. The relationships we build at the track make us a better engineering team,” adding, “Not only that, but the passion these engineers and technicians have for racing and for cars… it’s reflected in the way we design and develop cars for our customers. That’s why we do things like this.”

The endurance team at the Arizona proving grounds is part of a larger group of grassroots motorsports efforts across Toyota’s North American R&D facilities. Toyota engineers and technicians from Michigan, California and Kentucky also compete in several series across the U.S. including ARA stage rally, SCCA, Drift, NASA, and 24 Hours of Lemons. 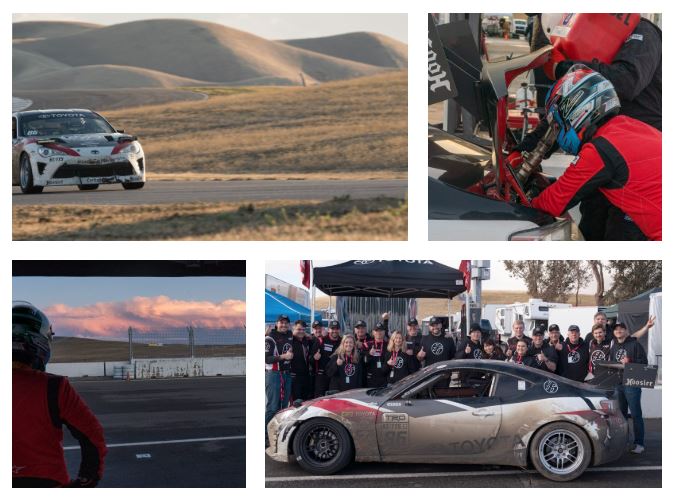