Toyota Reveals Additional SEMA Builds Based on Supra and Tacoma The new 2021 GR Supra Sport Top concept is a perfect follow up to the wildly popular 2020 GR Supra Heritage Edition that debuted at Toyota’s 2019 SEMA Show display, exciting Supra fans worldwide with its custom visual and performance upgrades paying homage to the iconic MKIV Supra from the late ‘90s. And Toyota’s TRD-Sport Trailer answers the backroads adventure calling and the growing popularity of overlanding getaways in a year where socializing with family and friends is a challenge.

Highlights from Toyota’s second wave of SEMA360 Showcase creations include:

Inspired by the overwhelming response to the GR Supra Heritage Edition that debuted last year, Toyota set out to dream up a fitting companion. Conceptualizing an open-air tribute to removable-top Supra models of the past, the team put much thought into the unprecedented task of removing the roof and a significant part of the GR Supra’s structure. The crew ensured structural rigidity by reinforcing large sections of the vehicle’s frame. The now iconic removeable roof includes two composite panels that can be stored in the car’s trunk. Unlike a “T-Top” car, there is no center bar down the middle, just open air as far as the eye can see. As a sibling to the GR Supra Heritage Edition, the Sport Top delivers similar styling cues like the MKIV-inspired basket handle wing and round taillights.  At the same time, it has a striking profile all its own that includes a sexy black piano-finish canopy over the top.

Overlanding’s growing popularity inspired the Toyota team to think outside the box, as they sought to make a true overland trailer out of a Tacoma pickup bed. The truly over-the-top TRD-Sport Trailer concept serves as a base camp to extend adventurers’ off-highway fun while being pulled by a Toyota truck or SUV. It features a remote-operated scissor-lift that raises an innovative platform several feet out of the bed. There’s a Yakima four-person tent with an awning and fly fishing-pole holders, a custom-built toilet and trash can, a refrigerator, a hot water heater, fresh and gray water holding tanks, a slide-out sink and stove, and efficient campsite lighting. And that’s just getting started, as the details and campsite features are nearly endless.

This 500-plus horsepower sports car wowed Toyota Supra fans when it debuted late last year, and it makes an encore appearance in 2020 as the ‘take it to the next level’ inspiration for this year’s GR Supra Sport Top. Returning to the spotlight for Toyota’s second wave of content, this one-off creation painted in Re-entry Red continues to excite fans with its retro-inspired custom headlights, taillights, and MKIV-style rear wing. Upgrades such as bigger brakes, tuned engine, turbocharger and ECU, and custom front and rear suspension ensure it performs as spectacularly as it looks.

The Ornamental Conifer Supra and the 4WD Overland-Ready Tacoma also get a reprise from last month with a freshening of new materials.

The final episodes for the GR Supra Sport Top and TRD-Sport Trailer can be found here: 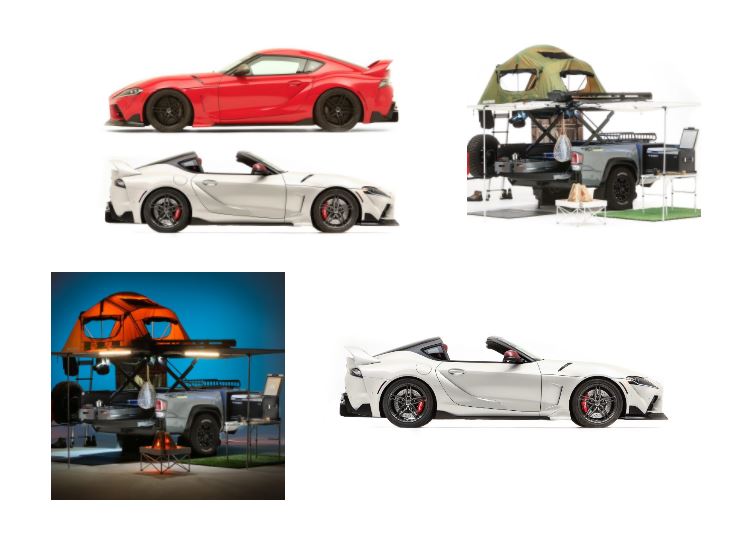 Toyota has created a tremendous value chain and directly employs more than 36,000 in the U.S. The company has contributed world-class design, engineering, and assembly of more than 30 million cars and trucks at our 9 manufacturing plants, 10 including our joint venture in Alabama that is scheduled to begin production in 2021.