I’m a bit of an iPhone fanboy and when Apple revealed its watch, I was intrigued and went back and forth on whether to move ahead on their wrist-encompassing gadget. I decided the last thing I need is yet another apparatus alerting me to incoming emails, text messages and calendar reminders. The retro Nokia 3310 is more my style — simple, fun and inexpensive. It’s similar in the world of cars.

The trick all-wheel drive system and Golf R-trumping horsepower of the Ford Focus RS sucked me in but I should have stuck with the minimalist and less expensive nature of my previous car, a Scion FR-S. Lesson learned. I’ve now swapped the go-fast Ford for the updated and rebadged FR-S — the 2017 Toyota 86. I couldn’t be happier as it’s a welcome return to a simpler world.

My normal drive routine with the Focus RS involved climbing into the overly-bolstered Recaro seats, fiddling with the buttons in an attempt to find an acceptable driving position (I never succeeded), and then selecting the drive mode that best fit my current mood and road conditions. I loved the way the Ford looked but, though quick and loaded with technology and performance, it never felt like a proper driver’s car. I’m a huge hot hatch fan and really wanted to love the RS, but the spark was never lit.

The Toyota 86 is a completely different experience. The rear-drive Japanese coupe felt like an old friend when I first sat in the comfortable, supportive driver’s seat and turned the old-school key to ignite the quirky flat-four. The six-speed gearbox is positive and rewarding, with some of the inherent notchiness dulled by a switch to Motul synthetic gear oil after the 1000-mile break-in period. Steering is direct and provides plenty of feel, especially for an electric setup. There’s also a welcomed lack of drive modes, meaning the throttle map and steering weight never change. The only settings involve the traction and stability control. I usually run the car in the more laid-back ‘Track’ setting or simply fully disable the system. The car doesn’t have a ton of power, but it does love to oversteer and, luckily, that’s my preferred corning attitude. It’s a key part of the fun with the 86.

Like a true, long-standing friend, there are quirks with the Toyota, but those quirks don’t remotely ruin the bond. Yes, the throttle only has one setting, but the mapping is too aggressive. I’m not sure if the shorter gearing of the 86 versus that of the FR-S is partly to blame, or if Toyota remapped the throttle to help mask the 2.0-liter engine’s lack of torque, but it’s something I’ve still not totally gelled with. It surely doesn’t help that I drive many different cars on a regular basis, but I find myself riding the Toyota’s clutch too often when pulling away from a stop or during a less-than-smooth upshift unless I fully concentrate on throttle application. My other issues are minor and have more to do with adapting to a two-door coupe after coming from a five-door hatchback. I wish the passenger seat stayed in the forward position when I’m plopping something or someone in the back seat and I’d prefer a release on the trunk versus having to hold down the button on the key — or to the left of the steering wheel. 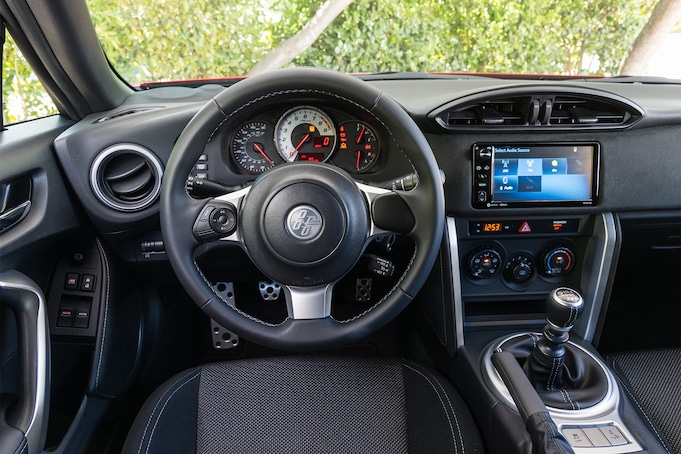 I’ve read many complaints about the infotainment system in the 86. Sure, an integrated navigation system that wasn’t antiquated, didn’t cost an extra $900, and included Apple CarPlay/Android Auto integration would be nice, but the somewhat dated base system works well. The addition of a magnetic iPhone mount helps, as I run Waze or Google Maps for navigation. I actually prefer the way the Toyota system handles iPhone/USB music compared to Ford’s SYNC 3.

Besides, the Toyota 86 isn’t about the technology and features. It’s about driving. And that’s where it blows the Focus RS away. I look forward to each and every journey in the 86. It is just such a fun car. The suspension tweaks for 2017 along with the shorter gearing and 5 hp-stronger engine make a bigger difference in how the car feels than I anticipated. The engine also sounds a touch better and seems slightly less coarse. But the marginally anemic powerplant is never going to be the key reason you buy this car. You simply respect that the lower center of gravity offered by the Subaru-based engine is a key part to why the 86 handles so well and you put up with the acoustics and lack of low-end grunt.

As cars continue to become too complex, there aren’t many affordable, proper sports car options left outside of the Toyota 86/Subaru BRZ and Mazda MX-5 Miata/Fiat 124 Spyder. I like Mazda’s small roadster, but I need rear seats for the kids and I’m not a big fan of convertibles. I hope enough buyers have purchased the FR-S/86/BRZ since it first launched five years ago to warrant a replacement. I also have my fingers crossed that Toyota and Subaru are ignoring the critics and don’t feel the need to open the car up to more mainstream buyers. Sure, I wouldn’t complain about a bit more power but I don’t want extra weight. More horsepower means bigger brakes and beefier suspension, which all add mass. Let’s remember what makes the Toyota 86/Subaru BRZ such a fun, pure car. Let those who don’t understand the minimalist rear-wheel drive coupe buy cars like the Ford Focus RS. They’ll never know what they’re missing.