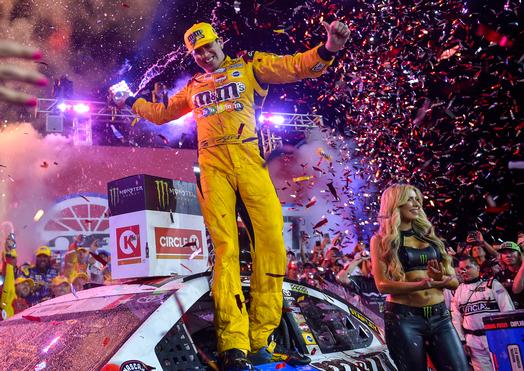 Busch triumphed in the Coca-Cola 600 by leading 377 laps (of 400) and winning the race’s first three stages en route to the checkered flag in the Monster Energy NASCAR Cup Series event on Sunday night. With his victory, Busch became the only driver to have won on each active NASCAR Cup Series track.

Busch started from the pole and led the field on four occasions before taking the checkered flag for one of the Cup Series’ four ‘crown jewel’ events.

“This one’s very special,” said Busch. “The Coca-Cola 600, I’ve dreamt of this race since I was a kid and being able to win this race. It’s a little boy’s dreams come true and, man, I just want to say that I thank NASCAR, for one, for giving me a chance to come out here and have this opportunity to race for my dreams and to accomplish those things.

“I don’t know if it’s ever been done before, but the first one to check off all the tracks and get it all done,” said Busch of winning on his 23rd different track at the Cup level. “I don’t want to go to any new ones. That would just have to start the whole process over.”

Busch led a 1-2-3 finish for Toyota, as he was trailed to the checkers by Martin Truex Jr. and Denny Hamlin, who led nine laps in the race.

The Cup Series points leader also set a pair of additional marks with his first-place finish – he became just the 10th driver in Cup Series history with more than 15,000 laps led and he has now paced 15,256 circuits in his Cup career, while also claiming his 100th pole position in a Toyota for the Cup race. Busch is the only Toyota driver to reach the century mark and he has claimed 28 poles in Cup competition, 53 in the NASCAR Xfinity Series (NXS) and 19 in the NASCAR Camping World Truck Series (NCWTS).

In NXS action at Charlotte on Saturday afternoon, Christopher Bell had the top-finishing Toyota with a third-place result.

“I had better tires than [race-winner Brad Keselowski] and just didn’t execute,” said Bell. “I’m going to be curious to look at the restart there and see if – see what happened and why I couldn’t get going. Bottom line, just didn’t do a good job accelerating there and that’s all she wrote.”

Bell currently sits second in the series point standings after seven finishes of fourth or better through 11 races in his Xfinity Series rookie campaign.

Busch finished eighth on the 1.5-mile track, while Brandon Jones was 15th.

Jones captured an ARCA Racing Series victory to continue Toyota’s season win streak at Charlotte on Friday night as Toyota drivers secured all of the top-five finishes in the event.

Jones led 32 laps (of 100) to give Toyota its sixth-straight ARCA triumph to start 2018 and also claimed the fifth ARCA win of his career.

The 21-year-old driver now has nine top-10 finishes across 14 starts in the NXS, NCWTS and ARCA in 2018. Jones currently ranks seventh in points in NXS, his full-time competition focus for the year.

In NASCAR regional series action, the the NASCAR K&N Pro Series East will race at Memphis International Raceway on Saturday, June 2 with the action tape delayed for broadcast on NBCSN on Wednesday, June 6.